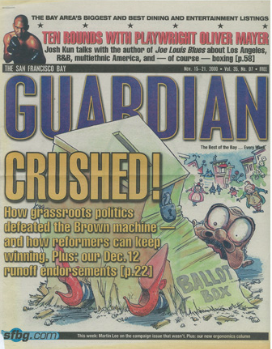 Blows Against the Empire

Late on election night, housing activist Robert Haaland swung by North Beach neighborhood activist Aaron Peskin’s victory party at the Cobalt Tavern. Haalandcame with Chris Daly, a homeless organizer in the Tenderloin. Before long, AIDS activist Jeff Sheehy and Sup. Tom Ammiano showed up to celebrate withPeskin and Daly what may be the start of the most significant progressive electoral uprising this city has seen in many, many years.

“We won! We won!” Haaland was screaming, and it didn’t matter which of half a dozen victories he was talking about at that moment.

The same sort of scene had been going on all night at crowded parties across the city, where – for once – a wide range of progressives and neighborhood activists had a lot to celebrate.

The situation nationally was confusing and grim: Al Gore had conceded, and then retracted his concession. George W. Bush was still claiming Florida. But in San Francisco, Peskin and Daly were both leading by substantial margins in their effort to become district-elected supervisors.

And they weren’t alone. In seven of the city’s 11 districts, candidates running as independents, challenging the political machine and agenda of Mayor Willie Brown had shown surprising strength and were finishing either first or second in the balloting, ensuring that the city will have a chance to elect a board with an independent majority in the Dec. 12 runoffs.

After the flood of mailers from big-money campaigns and their steady stream of TV commercials and paid telephone calls, it was grassroots organizing that triumphed.

Although Brown may narrowly duck the passage of Proposition L, the moderate growth measure aimed at reining in his dot-com development-happy Planning Commission (the vote was still too close to call at press time), it’s clear voters wanted a check on his control.

“He certainly did not get any kind of mandate on the way he’s running the city,” Phillip Babcock, president of the Harvey Milk Lesbian/Gay/Bisexual/Transgender Democratic Club, told the Bay Guardian. “[L] was attacked from the left and the right with [at least] $2.5 million. A lot of confusion was generated. Ending up with slightly less than 50 percent is not a victory…Most of his candidates are in weak positions as we’re heading into the [Dec. 12] runoff.”

In fact, in four of the eight supervisorial districts in which there will be runoffs, the progressive candidate who ran on an anti-machine platform is ahead, in some cases by a sizable margin. This happened despite the fact that a host of political action committees supportive of the mayor threw more than $500,000 in soft money into the races.

Three of the five Brown-backed incumbents on the San Francisco Board of Supervisors were forced into runoffs (Michael Yaki in District One, against neighborhood activist Jake McGoldrick, who came in a close second despite at least $25,133 in soft money spent against him; Mabel Teng in District Seven, who is ahead of independent Tony Hall and saw at least $33,607 spent in soft money on her behalf; and Amos Brown in District 11, who is trailing behind public defender and progressive Gerardo Sandoval, despite at least $135,000 in soft money spent on behalf of Brown). One, Alicia Becerril, was soundly rejected by the voters, coming in sixth in District Three. The other – Mark Leno – appears to have just barely avoided a runoff.

In District Five, public defender Matt Gonzalez was well ahead of School Board member and machine-backed candidate Juanita Owens, despite at least $88,901 in soft money and half a dozen slick mailers sent to each resident in the district. In District 10, former Planning Commission member Linda Richardson, who ran with the open backing of the mayor and saw at least $139,637 in soft money spent on her behalf, is ahead of independent Sophie Maxwell by only a 10 percent margin.

Sup. Leland Yee, who has offered a check on the mayor from an independent perspective and was the major target of a vicious negative soft money campaign, left his challengers far behind. If the latest results hold, it looks like he won’t be facing the mayor’s first pick in the district, Tom Hsieh, Jr., but rather JohnShanley, a former spokesperson for District Attorney Terence Hallinan. (Hsieh has pledged his support to Shanley, according to the San Francisco Chronicle.)

Moreover, voters approved two strong electoral-reform measures that were in part targeted at Mayor Brown. They passed both Proposition J, which attempts to reduce the financial influence of city contractors on elections, and Proposition O, which slaps the machine in the face by providing public funding for candidates.

“For those who’ve been saying San Francisco is moving to more moderate politics, [the election results] show San Francisco is still a liberal, progressive city,” pollster David Binder told us.

“I think even more than the mayor, it’s about the neighborhoods,” Sheehy, a progressive member of the local Democratic County Central Committee, told us. “The people who surprised the mayor-backed candidates were people who had strong neighborhood bases, like Aaron Peskin, Leland Yee and Chris Daly. These are people whose main concerns are not those of the mayor but the communities in which they live.”

Binder attributed the victory to two factors: a huge voter turnout that may run as high as 67 percent when the final ballots are counted – and a backlash against campaigns that obviously were paid for with big special-interest money. Even Chronicle columnist Ken Garcia, hardly a liberal icon, crowed on Nov. 9, “…the soft-money snakes who tried to prop up all the mayor’s candidates, his propositions and policies. They discovered that the citizens of San Francisco…they’re not stupid.”

Binder, however, cautioned that it may be too soon to determine if the general election has spelled the demise of corporate-financed campaigning – or the mayor’s clout.  Brown’s soft-money svengali, Robert Barnes, is already gearing up to spend more money in the runoffs. So is Residential Builders Association director Joe O'Donoghue,who represents the interests of some livework developers.

Voters can expect more slick, misleading  hit mailers and a concerted effort on the part of a united machine to stop the progressive reformers from nailing a majority on the Board of Supervisors.  In District Three, for example, Community College Board member Lawrence Wong pulled into second  place, way ahead of the mayor's first pick. Brown is expected to back Wong strongly against Peskin and to help direct soft money to Wong's campaign. Wong, a longtime ally of former DCCC chief and machine operative Natalie Berg, has

already met with the mayor (and he's actively seeking the endorsement of the Republican Party).

Binder noted that the presidential election brought a huge number of voters to the polls — some of whom won't be back for the single-issue supervisorial runoffs.  "When you see a high, high turnout like this, you see a higher portion of progressives, more people that support progressive causes [going to the polls],”  Binder told us.  He said the results "raise the question as to whether there is a permanent backlash against soft money and big glossy mailers.  Clearly, at some level people are turning against it."

"But the big question," he added, "is whether what we have seen is a real change in San Francisco politics or whether this is only specific to the unusually high turnout of this election.”  "Progressives cannot expect the kind of high turnout they got in November," Barnes told us. "The December electorate will more reflect the absentee ballots, and those went for [machine] candidates.”

As for the efficacy of soft money campaigns, Barnes said, "To claim glossy mailers have had no effect is not correct. Look at Prop. L [which appears to be losing at press time]. Here we have an example of where the mailers had the intended effect."

For his part, the mayor appeared on the AT&T S.F. Newshour show Nov. 9 and spun some sunshine by calmly informing interviewer Bruce Pettit that he would get along just fine with any new member of the Board of Supervisors. He has also insisted that the election was not a referendum on his administration. "Pundits have always said what's a referendum on my career. What's a referendum on my career is my own candidacy on a ballot, nothing else,” he told reporter Ilene Lelchuk in the Nov. 8 San Francisco Examiner.

But Brown can't be that pleased, not after his remonstration, delivered in his Oct. 30 State of the City address, not to elect "crazy people" to the board who largely campaigned on their independence from him (see "State of the Lies," 11/1/00).

Brown didn't want the return of district elections to San Francisco. But that system, at this point, has accomplished what it was supposed to. It has given neighborhood-based, underfunded candidacies a real chance against the influence of those who profit most from the status quo. "[District elections] should allow grass roots campaigns and those that are underfunded to be competitive with big money campaigns," Binder said. "We clearly saw that happen here.”

Or as candidate Peskin put it in his victory speech, "Now on January 6 the people will have a real voice on the real issues that affect [our] quality of life."