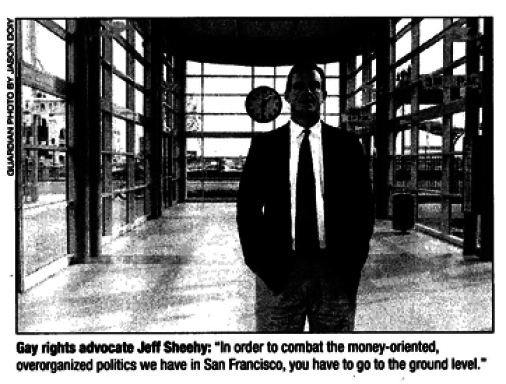 Activists who tried to get Tom Ammiano elected mayor have set their sights on taking S.F.'s Democratic Party back from the machine.

Reforming San Francisco's politics is like cleaning the manure out of the ancient Aegean stables. The Greek hero Hercules had to divert two entire rivers to scour the years of accumulated sludge out of those stalls, and it will be just as tough for San Francisco progressives to get rid of the corruption that's fouling the local political system.

That's in part because the corruption goes so deep. Mayor Willie Brown's Democratic machine doesn't just control city hall – it has an equally tight grip on many of San Francisco's ground-level political clubs. Other than the Harvey Milk Lesbian Gay Bisexual Transgender Democratic Club, few are completely free from the tentacles of the power structure, and – not coincidentally – few push important progressive causes that might offend the powers that be. 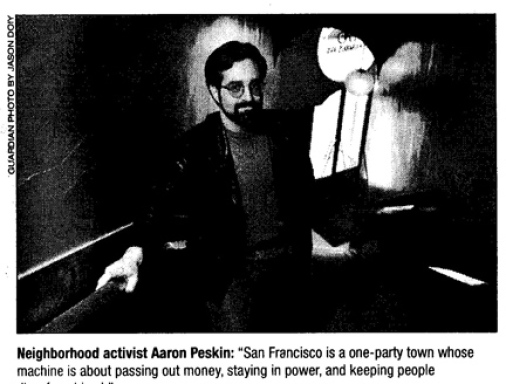 Nowhere is that more evident than at the most significant of the local organizations, the San Francisco Democratic County Central Committee. The committee, the official governing body of the Democrats of San Francisco, in theory represents the 59 percent of San Francisco voters who are registered Democrats. A powerful but little-watched organization, it endorses candidates for primaries and takes sides on nonpartisan issues as well. It controls the influential slate card of the Democratic party –and these days it also controls hundreds of thousands of dollars in "soft money" that go to finance political campaigns.

And now it's becoming the site of the next skirmish between the machine and the upstart progressive coalition that sought to put Tom Ammiano in the Mayors Office.

In the past few years the DCCC has:

Political analysts say the DCCC has turned off potential activists, because it has acted as a cheerleader for only one faction of San Francisco's politics, the Burton-Brown machine.

"One hundred percent of its resources has been devoted to one wing of the San Francisco Democrats," Rich DeLeon, chair of the political science department at San Francisco State University, told the Bay Guardian, "It should not be that way. They risk losing their credibility and their standing."

Right now, though, the committee is a force to be reckoned with. During election season, its endorsements go out on a slate card labeled simply "San Francisco Democratic Party" – a slate card pollster David Binder tells us is one of the most influential in San Francisco races.

That influence flows in predictable directions. To help Brown lock up reelection, the committee endorsed him in summer 1998 – more than one year prior to the election – without even interviewing candidates. It raised $553,091 in 1999 and spent about half of that, at least $264,682, on Brown's campaign. That's an unprecedented amount for the committee to spend on one issue or candidate. Among other things, it went to pay for such activities as playing recorded messages from President Bill Clinton on voters' phone lines.

"The DCCC took sides very heavily for Willie Brown," Jim Stearns, a political consultant who worked for multimillionaire candidate Clint Reilly in the 1999 mayoral race, told the Bay Guardian. "They did everything possible, stretched every legal loophole they could find for Willie Brown and the machine."

Not every Ammiano supporter is a Democrat, and the coalition that backed him doesn't even have a name, much less a formal organization. But some of the folks who worked on his campaign are trying to use the momentum built up in the mayor's race to take the DCCC back from the machine.

All 24 elected committee seats – 12 in the 12th Assembly District and 12 in the 13th – are up for election March 7. (Seven other seats are reserved for representatives of area elected officials.) The reformers hope to win 16 seats, enough to form a majority and turn the DCCC in a new direction.

"San Francisco is a one-party town whose machine is about passing out money, staying in power, and keeping people disenfranchised," neighborhood activist Aaron Peskin, who is running in the 13th district, told the Bay Guardian.

Party. These are people who have a history of advocacy, who want to make San Francisco more livable and better for all San Franciscans and remove it from big politics, big money, and raw power."

"The machine is supposedly liberal, but it is really about where the money is at," Phillip Babcock, president of the Milk Club and a candidate in the13th district, told the Bay Guardian. "It's not about supporting the average working person. It's about maintaining the status quo that favors the wealthy."

Brown won reelection last year with an unprecedented amount of soft money – more than $2 million. Big business poured that cash into "independent expenditure" committees, which were freed from campaign contribution limits by a lawsuit fought by Brown's lawyer.

The DCCC was a key part of that fundraising effort. At a single March 1999 event, it brought in tens of thousands of dollars from a host of sources, including city contractors such as Norcal Waste Systems. City law prohibits contractors from contributing to a candidate's campaign if the candidate, once elected, oversees the contract, but courts have ruled the law doesn’t bar contributions to "independent" groups like the DCCC.

The group "acted as a de facto candidate committee," Charles Marsteller of good-government group Common Cause told the Bay Guardian.

The reformers want the committee to make its finances public. They also want to see the Democratic Party spend less money keeping the likes of Willie Brown in office and more on an effort to bring young people and people of color onto Democratic voter rolls. 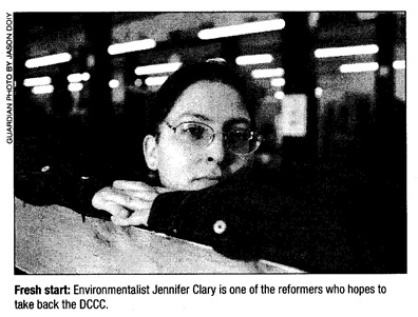 "To revive the Democratic Party on the left, you're going to need to reform the committee and have it act as an activist, connecting to the grassroots and badgering elected officials to consider that viewpoint," campaign consultant David Spero told the Bay Guardian. "Right now, the elected officials can count on the committee to give them votes."

"In order to combat the money-oriented, over-organized politics we have in San Francisco, you have to go to the ground level," equal rights advocates Jeff Sheehy, a candidate in the 13th district, told the Bay Guardian.

Given that DCCC chair Berg and another high-ranking Brown loyalist, treasurer Martha Knutzen, are not running again, the reformers see this as the right time to mount their effort. The key to winning, they say, is to keep the coalition that got behind Ammiano together.

"The DCCC needs to be changed. We feel this time we can make it for everybody like it should be," Willie Ratcliff, editor and publisher of the San Francisco Bay View, told the Bay Guardian. "If we're going to change the system, we need a coalition of people on the other side against Willie Brown. We gotta keep it rolling to keep up change."

But it won't happen without a fight.

Robert Barnes, a political consultant who helped spearhead the mayor's soft money campaign, told us the Alice B. Toklas Democratic Club – the machine-friendly queer community political club – is going all-out to elect a pro-Brown slate, including many city employees and commissioners, to the DCCC.

Barnes, who has enjoyed much influence at the DCCC owing to his business relationship with Berg, says, "Alice will certainly be out there."

Barnes, critics say, is a perfect example of the sort of corruption they want to root out.    At one point about four years ago, the DCCC had Barnes on its payroll at the same time  Berg had him on hers in her bid for Community College Board, according to longtime DCCC member Greg Day.

"We finally got that changed, but [Berg] never really saw anything wrong with it," Day told the Bay Guardian. 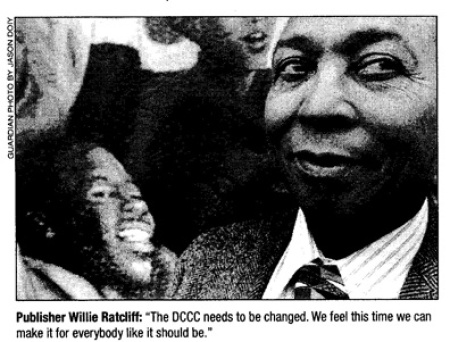 Berg didn't return calls for comment. Barnes told us he didn't think there was any problem that he represented Berg and the DCCC simultaneously. "I thought I was the best person for the job," he said.

Ironically, the DCCC was created to foster political reform. The concept of an elected county committee goes back to the early 1900s, when Hiram Johnson pushed to get control of the party out of the back rooms and into the hands of the voters.

The early 1980s saw a period of activism on the part of the committee. "We had actual discussions. We would argue about issues," Day told us.

Things have certainly changed. During Berg's term, which started in 1995, the bylaws were changed to require a two-thirds vote of the committee to overturn a decision by the chair.

This is certainly not the first effort to reform the committee. In 1998, more than 80 candidates – including Brown opponents from the left and the right – vied for slots. But the effort was stymied. In the first meeting after the June 1998 election, Berg held on to her chair, with Brown's blessing, in a highly controversial vote. Labor activists, Milk Club members, and some conservative Asian American Committee members tried to get San Francisco Tomorrow's Jane Morrison, who is running for reelection in the 12th district, elected chair. Berg hung onto the position by disqualifying one of her opponent's votes on a technicality. A judge later ruled the election invalid, but by that time Berg had enough votes to retain her seat.

Other reformers caved in to pressure, and the DCCC continued along its pro-Brown course. Tough questions about the committee's fundraising efforts or finances were politely ignored, Henry Louie, who ran as a reformer in 1998, told the Bay Guardian. Louie was the only committee member who did not vote to endorse the mayor in summer 1998. He is running for reelection in the 12th district.

"The committee is tightly held and controlled by a few insiders," Louie told the Bay Guardian. "We went in there to try and open up, but there weren't enough of us to hold that slate together. Once it became clear the DCCC was going to fall over itself to speak out and support the mayor's candidacy, there just wasn't the same energy to promote the reform goals."

As a first step, the reformers want an audit of the committee's finances. Louie told the Bay Guardian that, despite the DCCC's requirement that the treasurer release a report every month, financial information has been spotty and at the most has provided bottom-line numbers with little or no accounting.

"Reform starts with the DCCC and its books," former Milk Club president Criss Romero, who is running in the 13th district, told the Bay Guardian.

A reformed DCCC could move to empower the city's disenfranchised communities – starting with aggressive efforts to get younger voters and people of color registered to vote. The committee had not initiated a serious registration effort since 1992, even though, according to Binder, the past three years have seen young voters and people of color register at low rates with the local Democratic Party.

And if the committee could be opened up to activists from outside the establishment, it could give progressives a base from which to get involved in local politics. With Brown's allies controlling the clubs and the commissions, it has been tough for potential candidates for office to get a foothold.

With such a foothold, the surge of momentum behind the Ammiano campaign could be channeled into the coming elections, especially under the district system.

The committee "should provide fodder for a citizen-level reform effort," DeLeon told the Bay Guardian. "If it was more representative across the spectrum, and not just of the downtown interests, it could enhance the power of the community.”**